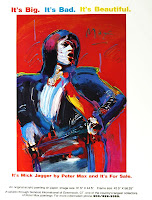 <-- Prom ad for a MICK JAGGER mix media paint. Page from a vintage  magazine of 1993.
Ad of LIBERTY HEADS --> paintings  released
in the Art Business news magazine circa 1990. it has a rare image of Peter Max working at his N.Y.studio. 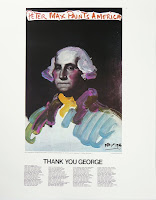 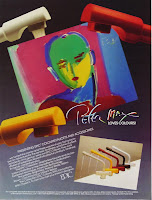 <--  Promo ad for the  Max paints AMERICA  book. year 2002
This was an ad for an exclusive line of faucets -->
named the "EPIC COLLECTION" and the
slogan was PETER MAX LOVES COLOURS 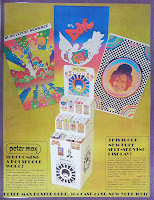 Advertisement for PETER MAX POSTER CORP, N.Y. 34th Av.   and the PEACE CORP poster.
POSTERS from the ad had a retail price of 2$ each, and they included a poster display - Dated 1969 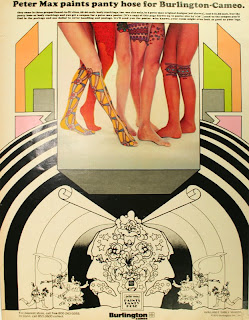 Burlington Pantyhose Hosiery 1970 Ad
Posted by The Max collector at 7:31 PM No comments:

A STEP ABOVE THE SIMPLE FAN

Yes, in fact someone else likes the PM work so much to the point that dedicated a special homage to him 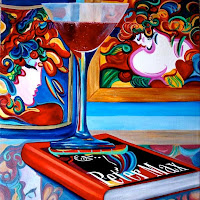 I have the utmost respect for Peter Max the artist, the promoter, the man.
He is diverse as any artist could be and amazing at promoting himself and his art.
This is the first "living artist" that I have included in my Connoisseur Wine Masters Series
but there is so much to say about his accomplishments that I just had to pay homage to him.
Peter, here is a toast for you and your wonderful life and work."

CONTACT Madison Moore
Posted by The Max collector at 7:10 PM No comments: