ONE OF A KIND SIGNED BASEBALL 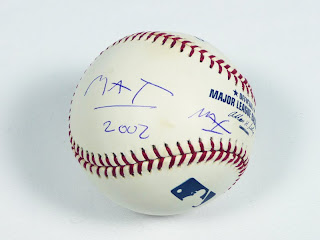 SELIG baseball signed 2002 by Peter max
NOTE: 21 SEPTEMBER 2000- ST. LOUIS, MISSOURI, USA: Internationally known artist Peter Max, tosses a baseball as he waits his turn to throw out the first pitch, prior to the St. Louis Cardinals-Houston Astros baseball game, September 21. Max is in St. Louis for a fund raiser at a local art gallery. cc/bg/Bill Greenblatt UPI
This is not that ball, but probably has a similar story.
Posted by The Max collector at 7:49 PM No comments:

No, I did not call him MAX for any special reason, it was my wife that named him MAXY, and I just call him MAX, and casually, it fits perfect with the content of this site.

He is our pride and joy and makes us feel that dogs have more soul than many human beings I know.
So, to all my visitors, I hereby present  MAX: 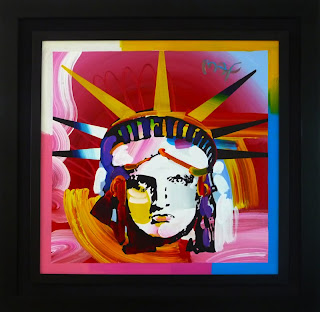 The NUMERO UNO, LADY LIBERTY HEAD 2010, Mix media & acrylic on Canvas. The Statue of liberty series has a very important history in the artistic life of PETER MAX.  EXCERPT from Washington Post, July 2, 1982: His latest project is saving the Statue of Liberty. "I like doing things with the White House," says Max, who was there a few weeks ago with Chrysler president Lee Iacocca, who presented President Reagan with one of six Statue of Liberty paintings Max created at the White House last July 4. "We came up with the idea of forming a commission to renovate the Statue for her 100th birthday. It was passed through Congress, and Iacocca was selected as chairman. We're going to try to raise about $100 million to clean the statue, fix leaks, whatever it needs." Max calls himself "America's own most patriotic artist.
And this  I don't doubt this for a minute. 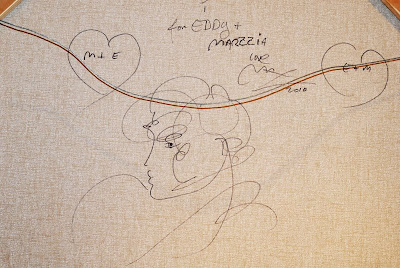 This is the back of the canvas, a PM art work all by itself!
The typical girl's face is especially nice. 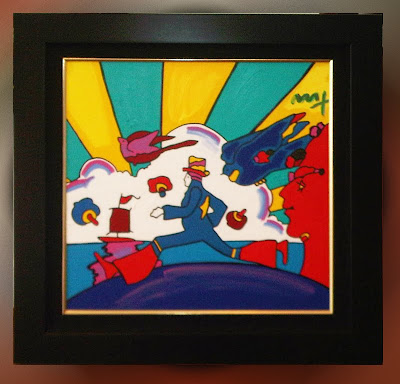 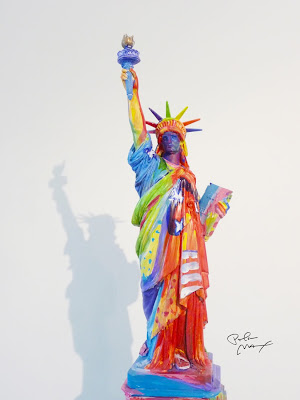 An open series STATUE OF LIBERTY dated 1999
Size aprox 18 ins tall. In reality, is a Green Plastic plaster
Souvenir statue sold in the middle on any New York street
but completely intervened and signed by Peter.

Posted by The Max collector at 1:03 PM No comments: