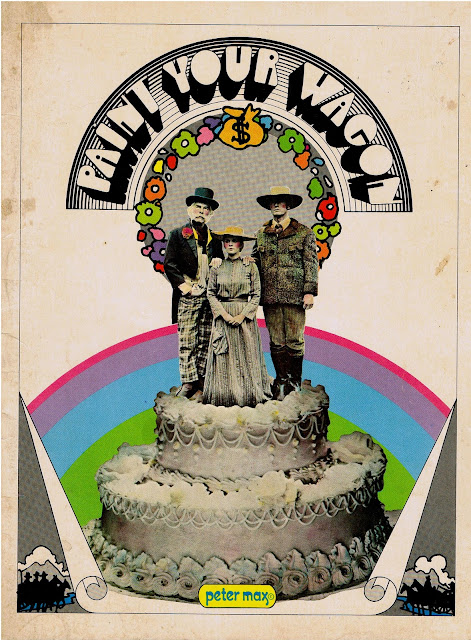 Western musical 1969, Max created  the program artwork for the front and back covers, combining the monochromatic images of the actors with the typical combination of image collages and overtone pastel colors, surrounded by the very expected colored rainbows and other psychedelic motifs. On subsequent thought, most probably Peter would have not accepted this commission since the project resulted in a true flop with no major historic importance, yet the program is very uncommon and the art representative to the late Sixties period.
A REVIEW THAT YEAR: "This is about a very unique Western/Musical. Truly a one of a kind. For those who have seen the movie, they know what I'm saying and for those who haven't they should see it. Before it was a movie, it was a Broadway Play. The Star and Co Star were perfect together, and I'm sure there are many who will be surprised to know that the "tough Guys" sing quite well and show a totally different side, but then they are truly talented. Lee Marvin who sings and shows the tender side, and Clint Eastwood is certainly not Dirty Harry in this part. John Mitchum who's talent like his brothers go underrated, although you most likely will not recognize him, as he does not look very much like Mitch. The music is beautiful".
From a PARAMOUNT pictures photo.