When I took PETER's photos in July of 1972, one of them had him comfortably sitting on a couch beneath a large version of the RUNNER IN RED creation.
This artwork is perhaps one of the most faithful representatives of the COSMIC era since it has all the components of that period of his  incredible psychedelic/Pop worlds.
These are the two versions of the images, the original one in Black and White, that although a bit out of focus ( I used to experiment with Highly Exposed film, big grainy prints, and I did my own lab developing), and then, a superimposing I photoshoped of a copy from the Rileys's book The Art of PETER MAX, page 9, published in 2002 by Harry Abrams Inc. 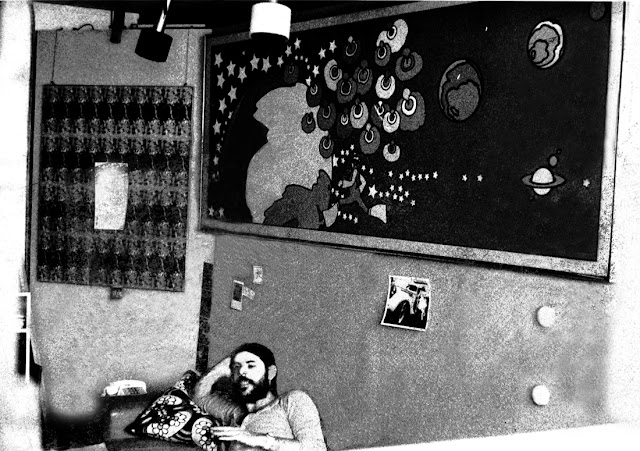 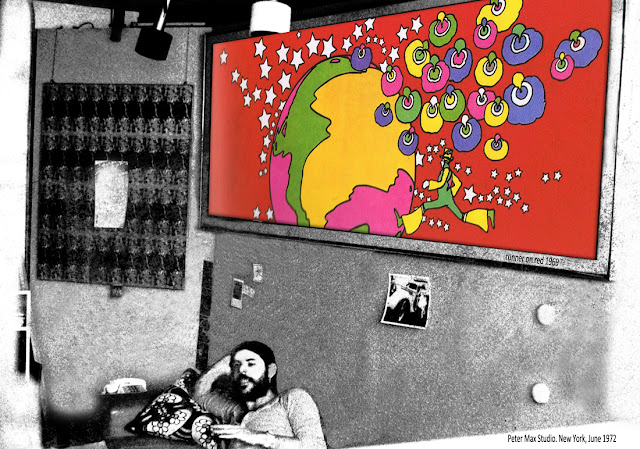 Edited version with the distinctive Cosmic trademark: The Runner (same as the Cosmic Runner artwork), the colorful world, the stars, and the assorted miscellaneous inexplicable elements.
I found out today that the original "Runner in Red" was a project used to decorate or perhaps as part of a sales Ad on New York buses in 1969 ( info provided by John Fisher from UnfoundArt ). And one of the only small versions I've seen today is sold at Ocean Galleries in Avalon, New Jersey.

Posted by The Max collector at 2:52 AM