A very special visit to PETER MAX studio in 1972 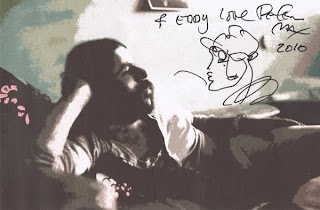 June 1972, I was 22 years old and visiting New York, Mr. Max was already pretty famous, especially after his LOVE and COSMIC RUNNER collections. I was a pseudo-hippie who admired his work and even tried to put his ideas in my rudimentary drawings, so I decided that I had to meet him, not an easy task for a youngster from Italy living in South America. I moved some contacts in the magazine industry in my home city, and voila!, I got the assignment as the graphic reporter for a magazine  (I was an amateur Photographer) .To my surprise and rejoice, next day I found myself in his down town NY three floors studio, sitting down in his private office chit-chatting with him about I cannot remember what. (image enhanced with Photoshop and signed by PM in May 2010)


He was lying down comfortably under the protection of RUNNER IN RED (done in 1969. The image was in black and white, I over pasted it in color for a dramatic effect). 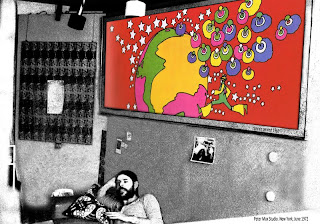 
He was then 35 and yet his spirit was the quintessence of that revolutionary era that changed the world, he was so very cool and spiritual that I was marked by him for a long time. I had my Nikon F2 with the mandatory 105mm portrait lens and a pushed 800 ASA Kodak film for larger grain (unfortunately, since MAX is all about colors!) and I took some images, that I finally found after 38 long years, the bad thing: I could never publish this interview. 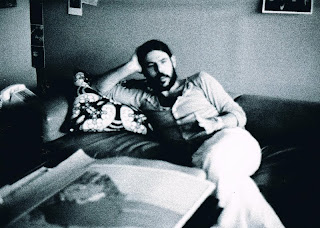 For those who do not believe in destiny... here comes the good part of this story: I am having my usual morning coffee reading the Miami Herald, and to my surprise I read some kind of info-ad mentioning that Mr. Max will be present at a Coconut Grove Gallery (South Miami) , so I decided it was only fair that I gave him copies of the New York visit images as a gift.  Today, I have no doubt that he is the last of the relevant POP artists around and he will be for a while since he has a healthy life and a peaceful attitude.

May 15th, 2010 Location: MAX AT THE GROVE, south Miami, time: 8:00 P.M.  My wife  and I arrive at the meet the artist  presentation of PM, and the tiny space was filled with his art, most of his work were represented there in one way or another, be it canvas, mixed media and acrylic, lithos or prints along with some objects such as a Mexican Fender Guitar, a 1994 World Cup soccer statuette, and Football helmets. It was quite crowded yet comfortable to roam around detailing the art pieces.

PM. was sitting next to a table talking with other gentlemen, but I managed to catch his attention and had the chance to hand him the New York images. He was startled, immediately passing them around all his business associates and nearby friends, then very humbly asked me "Are these for me?". I was amazed, perhaps waiting some arrogant and detached remark, but I was pleased by giving him the two somewhat destroyed picture, almost sure that his work force has many experts in retouching them, plus I included some additional personally PhotoShopped reconstructions I made for him. He was so very gracious, gave me his personal card and told his assistant to remind him to have a souvenir sent to me to Miami. I had the audacity of asking him to sign one of the copies of the pictures I took, and he very graciously accepted. What a souvenir for my collection!

September 6th, 2010 - I was updating the website and I realized this uncommon fact of Peter Max's life, his personal AAA.

ASTRONOMY: His first real passion that finally remained as a hobby when he decided to go for Art
ART: His way of life, creativity, expression and cash cow
ANIMALS: When he married his wife Mary and has been sponsoring all the wonderful animal protection Foundations

He's not only and Art Icon, he's a sensible human being.
www.themaxcollector.com
Posted by The Max collector at 4:24 PM