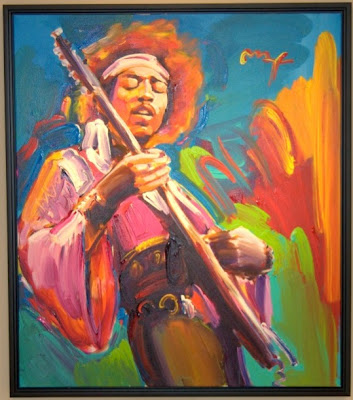 WHEN PETER MET JIMI
from DC9 ( at night (Dallas Observer)
James Keith, Jan 30th, 2011
"I was renting a house in Woodstock," Max recalled, "and when we moved in, my little daughter found this old washed-out denim jacket. She was about four years old and she loved it, but it was so big on her that it would just drag on the floor like cape. One day, I am sitting on the porch -- and this is like three months into living there -- and some guy knocked on the screen door. It was Jimi Hendrix!"

Through conversing with Hendrix, the nature of the legendary guitarist's visit became clear: Hendrix had previously rented a room in the house from his manager, Michael Jeffrey, and had returned to claim an old denim jacket he was particularly fond of.

"Just as he said it, my little daughter comes walking by with the jacket dragging at her feet," Max said. "I said, 'Here is your jacket, please let me give it to you.' But he said no. The jacket was hers. She still has the jacket to this day."

That, he explained, is the 1960s magic he hopes his work can continue to bring to audiences today.

"You lived inside the magic," he said. "It was really great to live in Woodstock around all the musicians. You would walk down the street and see Bob Dylan and say, 'Hey Bobby! How ya doin'?' My whole early 20s were filled with rock stars."
MY PERSONAL JIMI - Ed Gugliotta 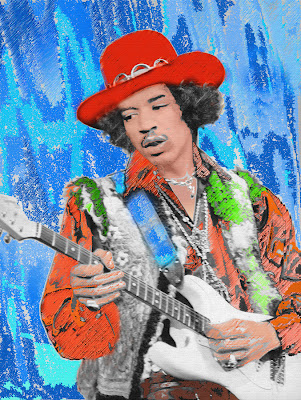 From a Black and white Internet image and Photoshop
Posted by The Max collector at 8:11 PM